Davenport Blues was the first composition by Bix Beiderbecke to have been recorded. The historic event took place in the Gennett Recording Studios of the Starr Piano Company, in Richmond, Indiana, on  January 26, 1925. Bix wrote, late in December 1924, to E. C. A. Wickmeyer of the Starr Piano Co. to arrange a recording session. After an exchange of letters, Bix and the contact man of the Starr Piano Company settled on Monday, January 26, 1925 as the date for the recording session.
The musicians in the group - Bix Beiderbecke and His Rhythm Jugglers - were: Bix (cornet), Don Murray (clarinet), Tommy Dorsey (trombone), Paul Mertz (piano), Tommy Gargano (drums), and Howdy Quicksell (banjo). Bix drove with Hoagy Carmichael from Indianapolis and the musicians were supposed to meet Bix at the Gennett studios. Howdy Quicksell did not make it until the afternoon and therefore did not participate in the first two recordings, Toddlin' Blues and Davenport Blues. All the musicians played in the last two recordings, Magic Blues and No One Knows What's It All About, but all takes of these two songs were destroyed. Murray, Dorsey, Mertz and Quicksell were members  of the Jean Goldkette Orchestra and we know their whereabouts following the Rhythm Jugglers session. Murray, Quicksell and Mertz continued working for the Jean Goldkette organization. Nothing is known about Tom Gargano, a freelance drummer from Detroit. Tommy Dorsey went to New York and joined the California Ramblers. Apparently, Tommy Dorsey was good friends with Doc Ryker. Rickey Bauchelle, Doc's daughter, has letters that Tommy Dorsey wrote to Doc Ryker. In a letter dated February 28, 1925, Tommy writes, among other topics, about the Gennett-Jugglers date: "I am sure surprised to hear that Bix is going with Charley Straight. I thought he was going back to school. I hope he dont forget I am living if he gets any royalty at all because that trip cost me sixty bucks, they told us in the Gennett place that the records would not be out for about two weeks yet." 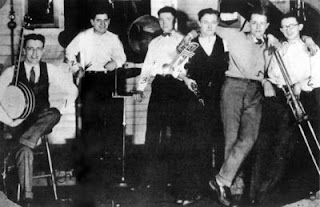 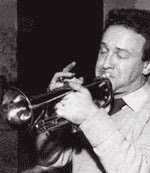 Davenport Blues is a number composed by Bix Beiderbecke and recorded by him, with his Rhythm Jugglers, in 1926 (top photo). With him were Don Murray on clarinet and Tommy Dorsey on trombone. It is very badly recorded, pre-electric, muddy and muffled. Only Bix’s cornet emerges with any clarity. Davenport Blues is not a real blues. It is a jaunty, medium tempo number which in Bix’s recording consist of 3 sections, each of 32 bars. The first section is the verse; the melody here has a preliminary unfinished quality about it as if leading to another more striking one. The second section consists of a 16 bar variation on the verse theme, followed by a reprise of the theme itself. The third section is the chorus, the most distinctive, bitter sweet melody starting with two four note rising arpeggios, then descending to “blue” Aflat and a trill, followed by a repeat, a variation and a reprise. Bix’s cornet is tender and relaxed; he plays very much “on the beat” giving it, to our ears, a rather archaic quality.

This archaic quality is even more apparent in the version recorded a year later by Red Nicholls. If Bix plays on the beat, Nicholls is nailed to it. It is however a much clearer electric recording and we get a true idea of Nicholls’s clipped cornet and Miff Mole’s effortful trombone. The tempo is similar to Bix’s recording. The order is reversed. The chorus is played first on cornet. The verse comes in with Mole’s trombone before reprise of the chorus on alto sax, piano and cornet in that order. It is well drilled and clean but to our ears, even more so than Bix’s, it is corny – on the beat, jerky and ragged.

Bunny Berigan, dubbed Bix’s successor in the 1930s by virtue of the lyrical quality of his playing, also recorded Davenport Blues with his own band in 1938. Rhythmically and musically this is more sophisticated. Sixteen bars of the verse from the band are followed by the chorus melody on Berigan’s trumpet, much better played and with more subtlety than either Bix or Nicholls. Berigan’s rather more Louis Armstrong like tone gives it more drama and depth.

Louis Armstrong, recently deceased, was the subject of a memorial concert at the Queen Elizabeth Hall, London, in November 1971. On that night Davenport Blues was played as a duet by Alex Welsh (lower photo above) on cornet and Fred Hunt on piano. A CD of Alex Welsh’s contribution to the concert has been issued (but it is hard to get). This time it is slowed right down, concentrating solely on the chorus. Welsh’s entry after an opening piano flourish from Hunt is stately. The theme is played simply with some flourishes but never straying far from the melody. At this tempo the melody opens out, and seems more like a real blues than it is. Welsh’s cornet is clean; it has something of Bix’s bell like tone but with a burnished quality that gives it more warmth. Welsh plays the “blue” Csharps and Aflats with relish, leaning on and roughening them. He gives the melody weight, drama and pathos.

Hunt’s solo starts with broad sweeping arpeggios interrupted by a brief boogie passage. The florid right hand gives way to single note flurries, a section in double time with stride like piano towards the end. Then Welsh returns. He plays an inversion of the melody, with interpolations of real blues inflections before coming back to the melody and some double time interplay with Hunt’s piano. In the second sixteen bars he stays close to the melody, with grace notes over double time, then to the last four bars played simply and straight to a gentle close in slower time. At the end is Hunt's poignant reprise of the opening notes of the melody high up over Welsh’s long held final low note on cornet.

There are other versions of Davenport Blues. But there is no doubt that the version played by Alex Welsh and Fred Hunt at the Queen Elizabeth Hall on 28 November 1971 in honour of Louis Armstrong is the finest ever recorded.