Ralph's favorite musicians were Bix Beiderbecke and Red Nichols. He published articles in several jazz magazines and a series of pamphlets about various jazz artists and subjects. Here is a list of some of the pamphlets he authored.

Ralph Venables was editor for of the 1947 “Esquire's Jazz book.”

Venables was very interested in discographical information, at a time when this was an infant discipline. In July 1949, he published, in collaboration with Albert McCarthy and Dave Carey, the first volume of  “Jazz Directory, The Directory of Recorded Jazz and Swing Music,” an alphabetical listing of jazz artists and their recordings in chronological order. By 1957 six volumes had been published covering musicians from Cecil Aagard to Fred Longshaw. Unfortunately, at this point the publishers, Delphic Press, discontinued their support of the publication.

When Ralph died, his collection (mostly white jazz, including all of Bix's Claxtonolas) went to J. R. T. Davies.

Some of his correspondence went to Russell Barnes.

In an email message of  April 5, 2009, Russell explains the circumstances associated with his meeting Ralph.

“I'm almost eighty and grew up on the during WWII.  In 1943, when the Forces started to arrive, so did VDiscs followed by AFN Radio.   My chums and I, to the alarm of our parents, became infected by the music - a disease we've enjoyed ever since.

I retired from my work twenty years ago and my wife Jane (a retired Librarian) and I enjoy the very rural area in which we live and the snug little cafes and restaurants that lurk amid the leafy lanes.

One afternoon, in a small restaurant, we struck up a conversation with another couple who also 'did the rounds'.  They introduced themselves as Ralph and Pam. The husband was clearly an erudite and charming man with a quirky sense of humour and an insatiable liking for Cheese on Toast.

By chance, months later, the subject of Jazz came into the conversation and I realised that he was Ralph Venables, the veteran Jazz Discographer and Journalist with whom, in the 1960's, I'd had brief jazz correspondence.   From then on the girl's chatted over the books they were currently reading, as Ralph and I sat in his car listening to some alternate take from his considerable record collection.  He had, I gathered, an almost complete collection of Red Nicholls's recordings.

Ralph, who was several years older than I, had a debilitating disease of the spine - just below the neck- which he bravely bore.   When driving a car became a problem he purchased a four wheeled souped-up invalid carriage, upon which he raced around the village to the dismay of elderly ladies and the Vicar.

When he died his memorial service was packed with people from all walks of life.  His record collection he bequeathed to John R T Davis.

A couple or so months later Pam invited us over to Tea in their Cottage and it was most enjoyable. Just a we were leaving Pam handed me a large frayed envelope together with an equally dilapidated folder.   Ralph, it seemed, wanted me to have the contents.

It turned out to be his correspondence with US Jazz Musicians during the period circa 1936-1946.     Because, at that time, many other pressurising things were going on in my life the contents were stored safely in the dry and away from the light.

I've recently purchased appropriate archival storage boxes and acid free transparent sleeves and the sorting has begun.  Not all letters are complete.  Some are just single pages from what is clearly a lengthy correspondence.   As some are over seventy years old it's not surprising pages have gone astray.”

Way back in 1976, I attempted something I had considered for some long while; organise a group of local jazz enthusiast so we could raise enough cash through which we could invite American (and other) jazz musicians to play in our small Town of Blandford Forum, here in the County of Dorset, UK.
Blandford is in the heart of a rural community, largely dependent on farming and agriculture to survive.  Even more so, thirty years ago.
My support came from sources I never expected : A Police Sargent, a Post Office worker,
an Antique dealer revered for his knowledge of 17th century English oak furniture.  And a highly skilled french polisher who travelled Europe renovating furniture in the homes of the wealthy.
I approached the Editor of Jazz Journal in London - the UK's long established jazz magazine.  To my delight and surprise the Editor, Mr Sinclair Traill, telephoned to say he was born in Blandford and would be delighted to help where he could.
And so The Blandford Jazz Circle was formed.  Our first "Evening of Jazz" was held in 1976 - with stride pianist Ralph Sutton backed by our finest local musicians.  It was a sell-out with every seat filled.
Over the years I organised and presented thirty-two " Evenings of Jazz " :   Our last was in 1994.     The visiting musicians included :
Ralph Sutton, Art Hodes, Dick Wellstood, Axel Zwingenberger,Oliver Jones, Wild Bill Davison, Yank Lawson, Humph Lyttleton, Clyde Bernhardt, Al Grey, Bud Freeman, Peanuts Hucko,  Buddy Tate, Bob Wilber, Kenny Davern, Benny Waters, George Van Epps, Barney Kessel, Pete Appleyard, Jack Lesberg, Butch Miles, Jake Hanna, Jimmy Witherspoon, Adelaide Hall, etc etc
We have some eight hours of unissued tapes of these often remarkable sessions, plus  interviews with Bud Freeman and Clyde Bernhardt.   In our library we have copies of ' The Melody Maker', back to the early 1930's and on through the war years of the late 1940's.
Ralph Venables was aware of these efforts and may have prompted him to make a gift of his cherished letters.

I am grateful to Russell for his generosity and for his permission to publish some of Ralph’s correspondence in the Bixography website.  Uploaded May 14, 2009

Photos of Jimmy McParland in World War II, in England. Uploaded May 14, 2009 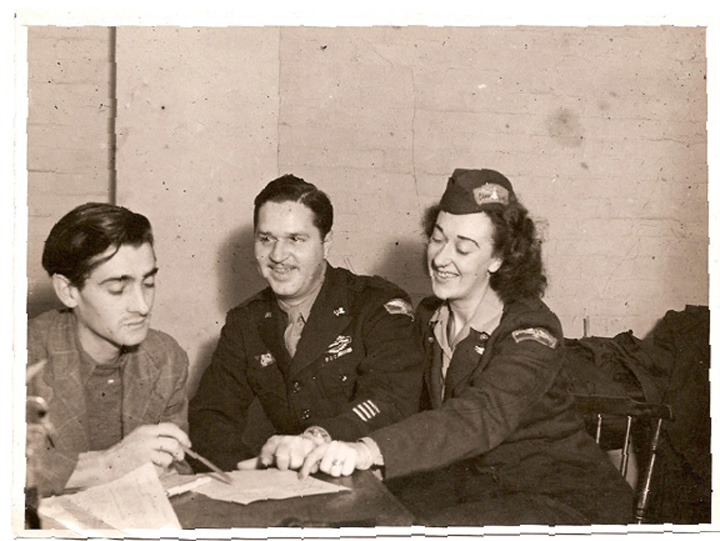 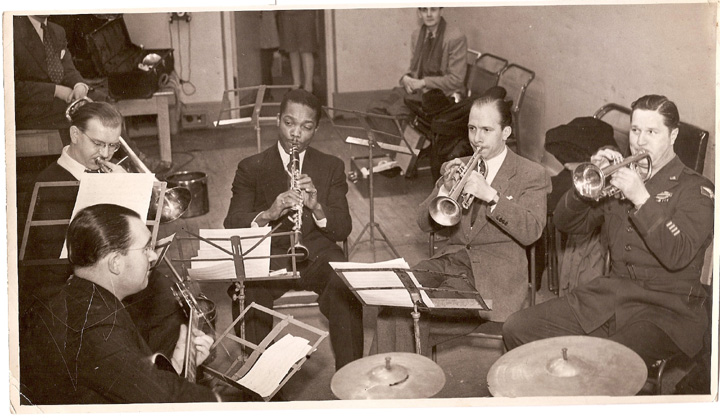 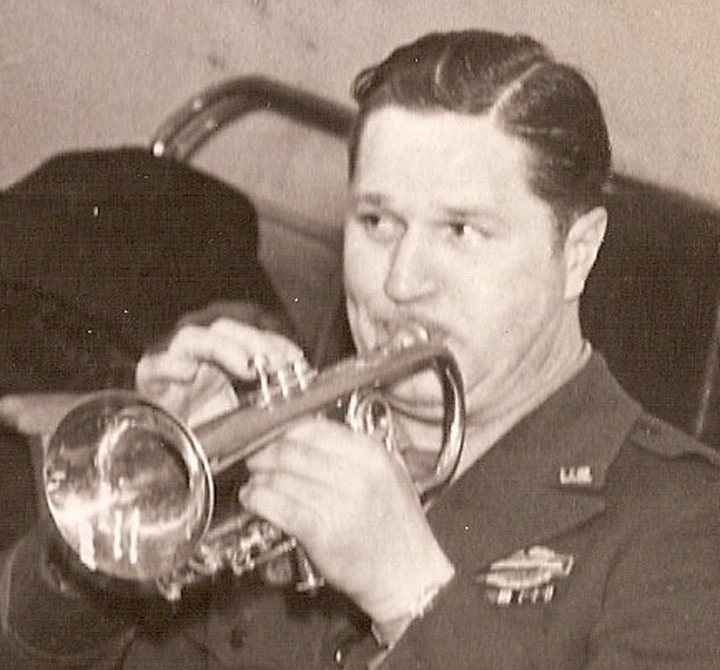 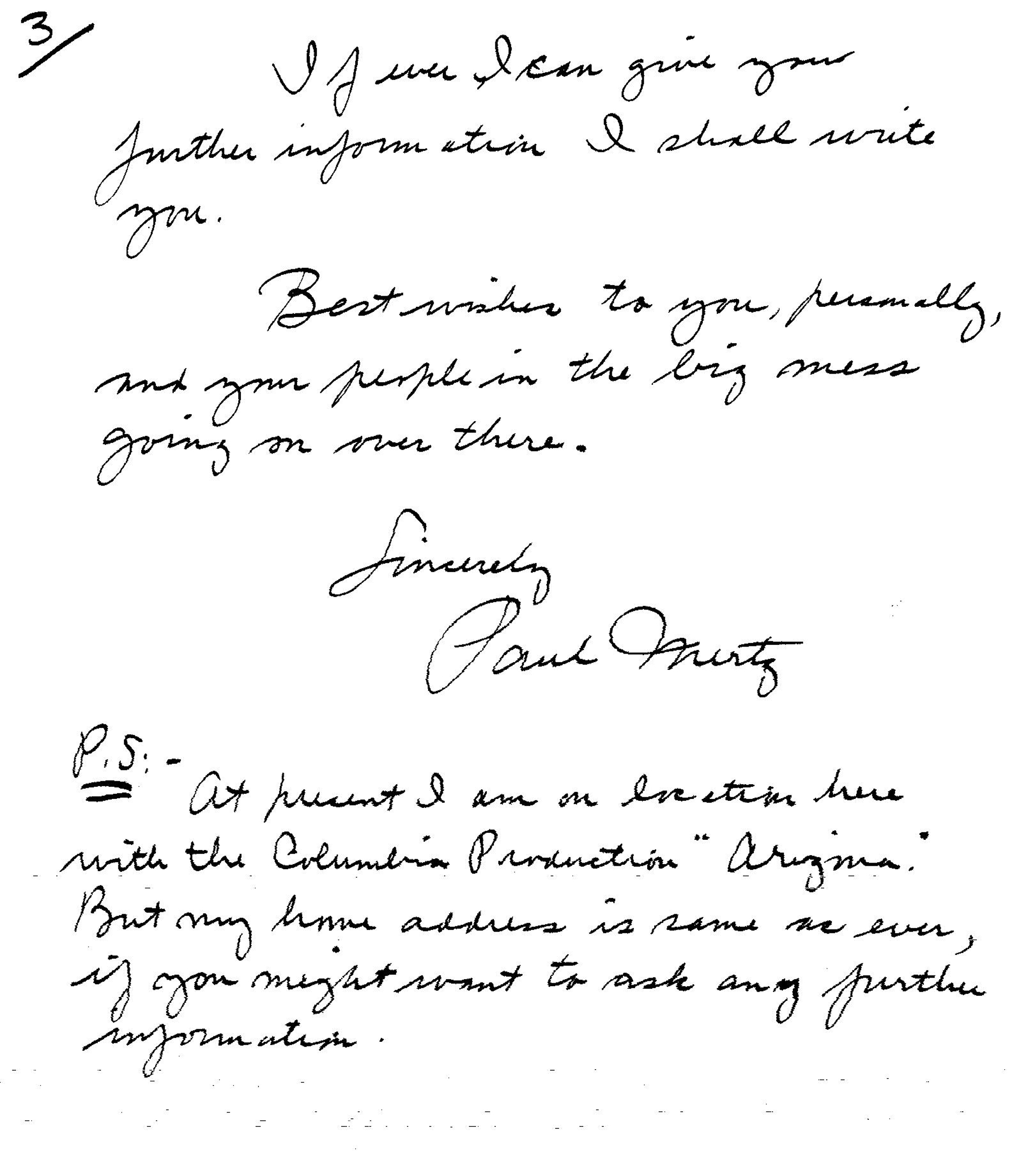 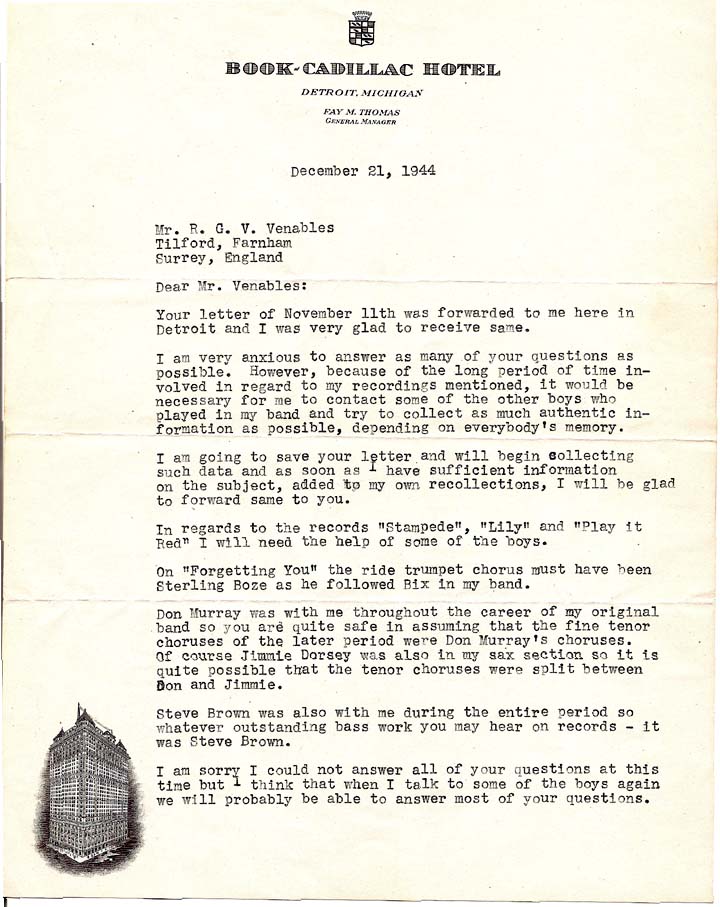 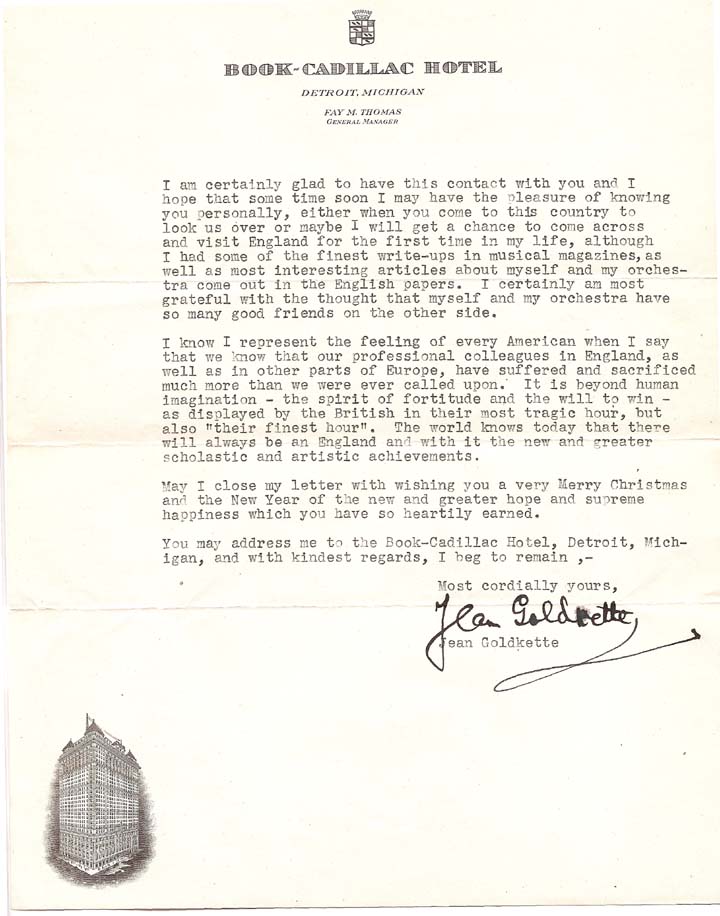 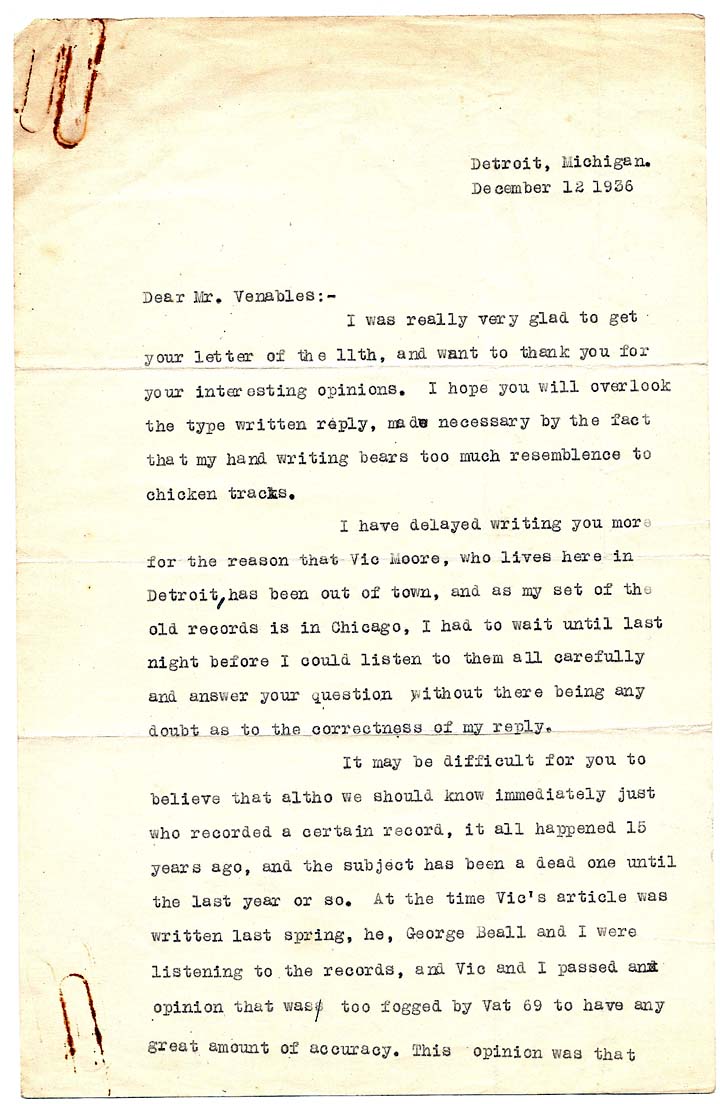 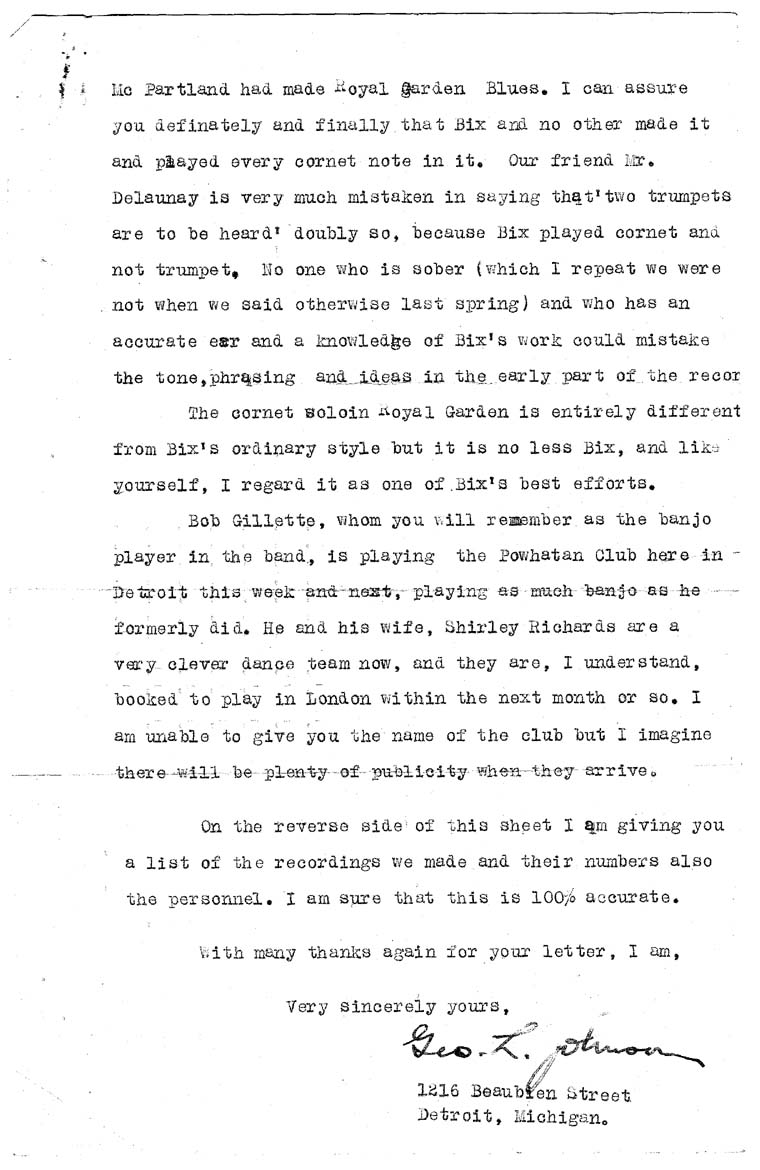 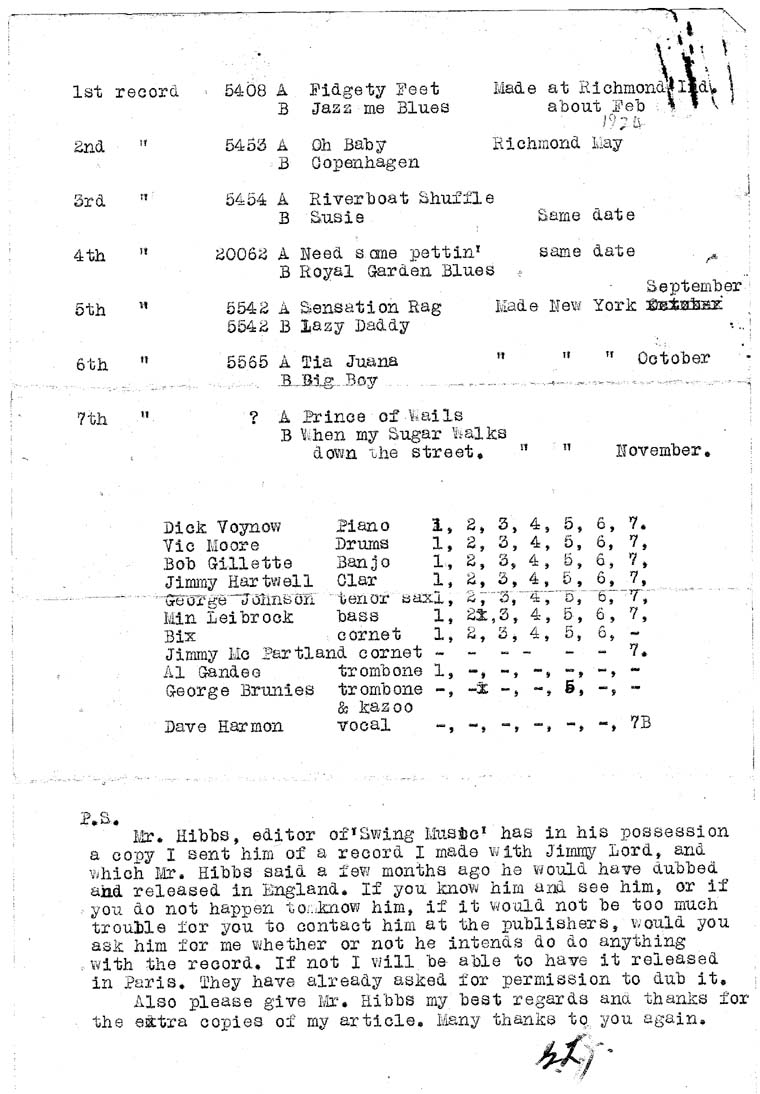 Letter from Howard Kennedy. Uploaded June 19, 2009
Howard Kennedy was a banjoist who played with Jean Goldkette's "Breeze Blowers" and withLud Gluskin in Europe in the 1920s (at the sme time as Gene Prendergast, another Goldkette alumnus.. 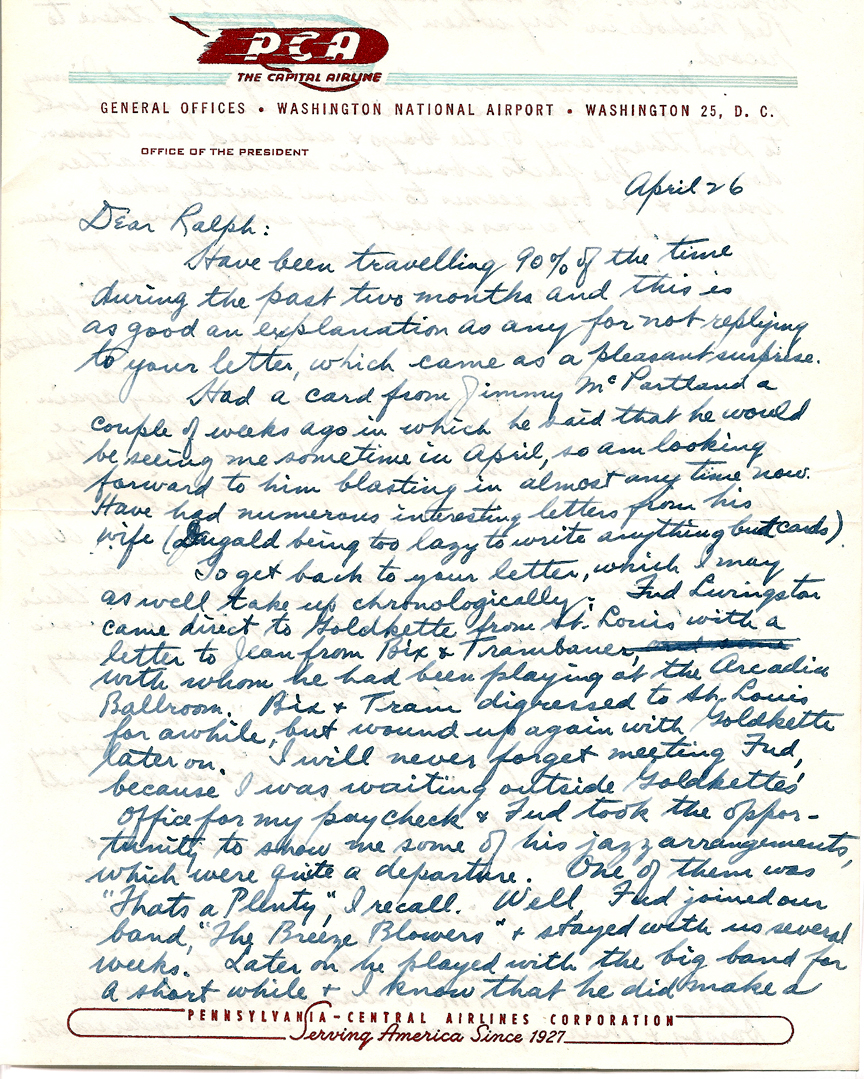 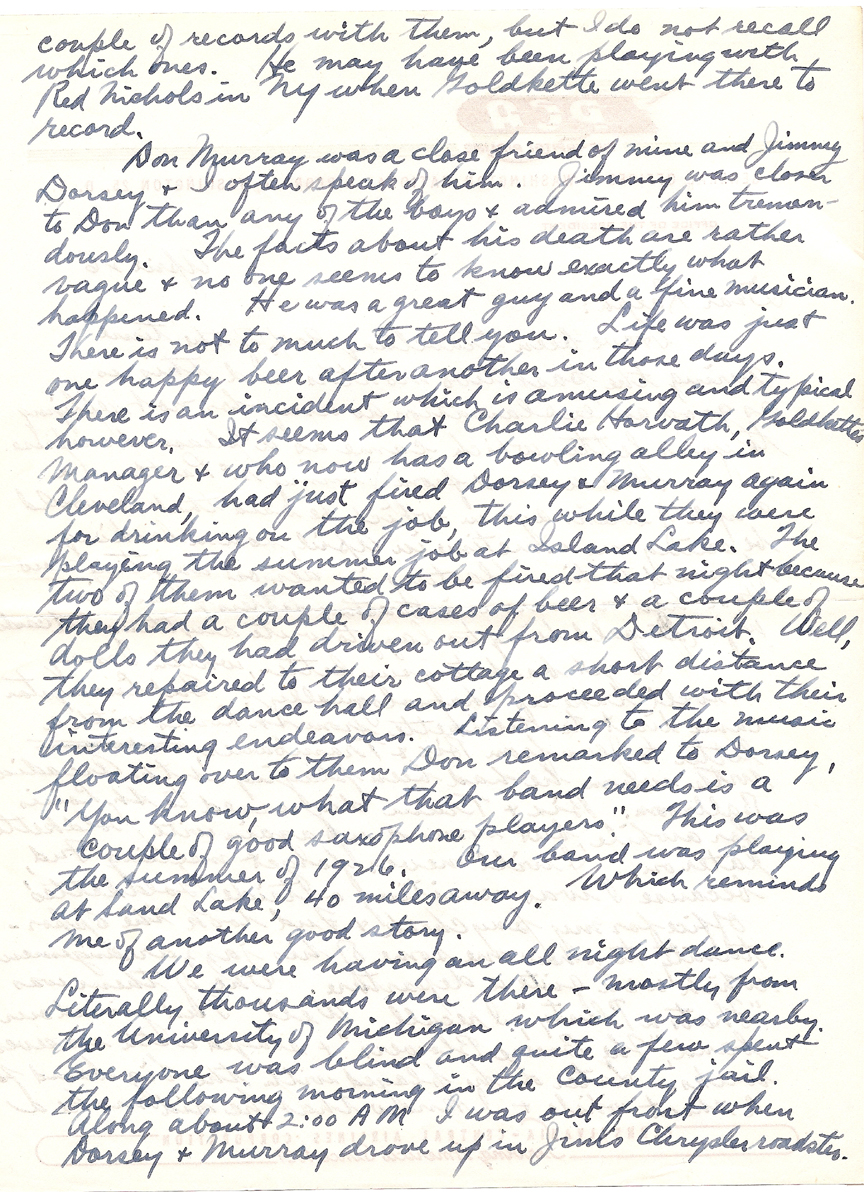 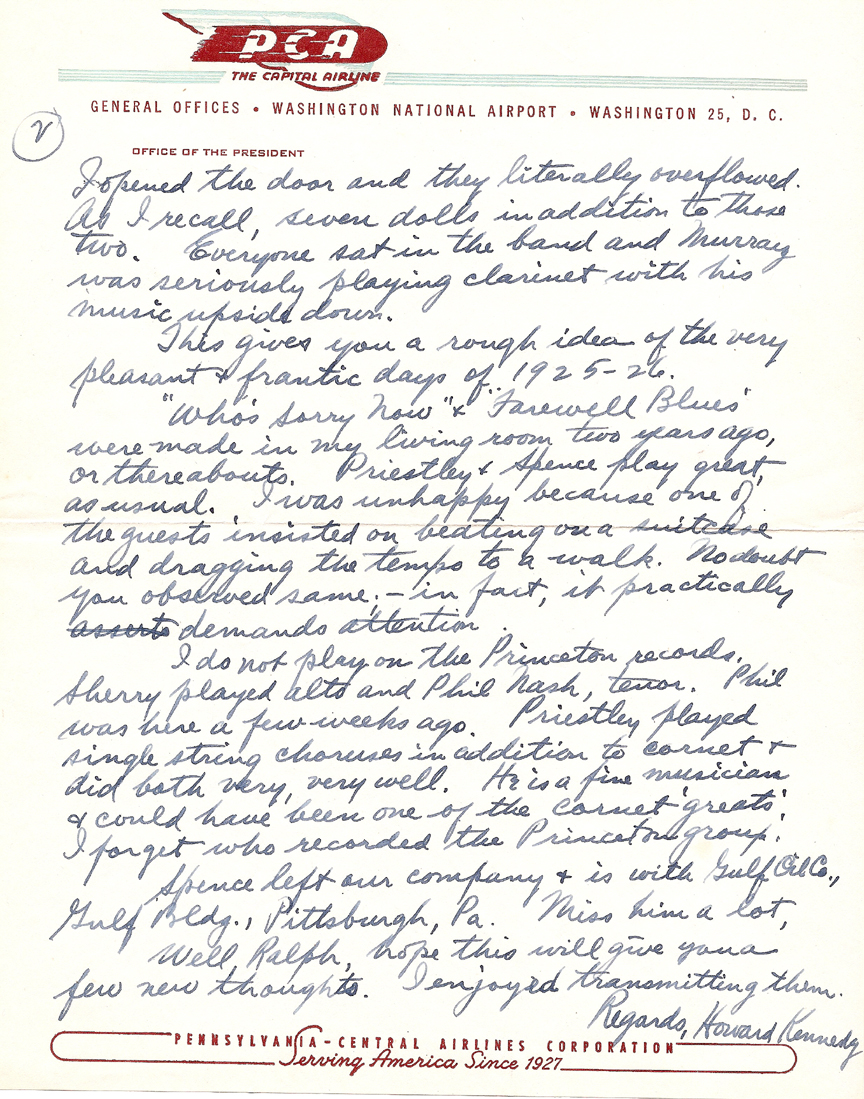 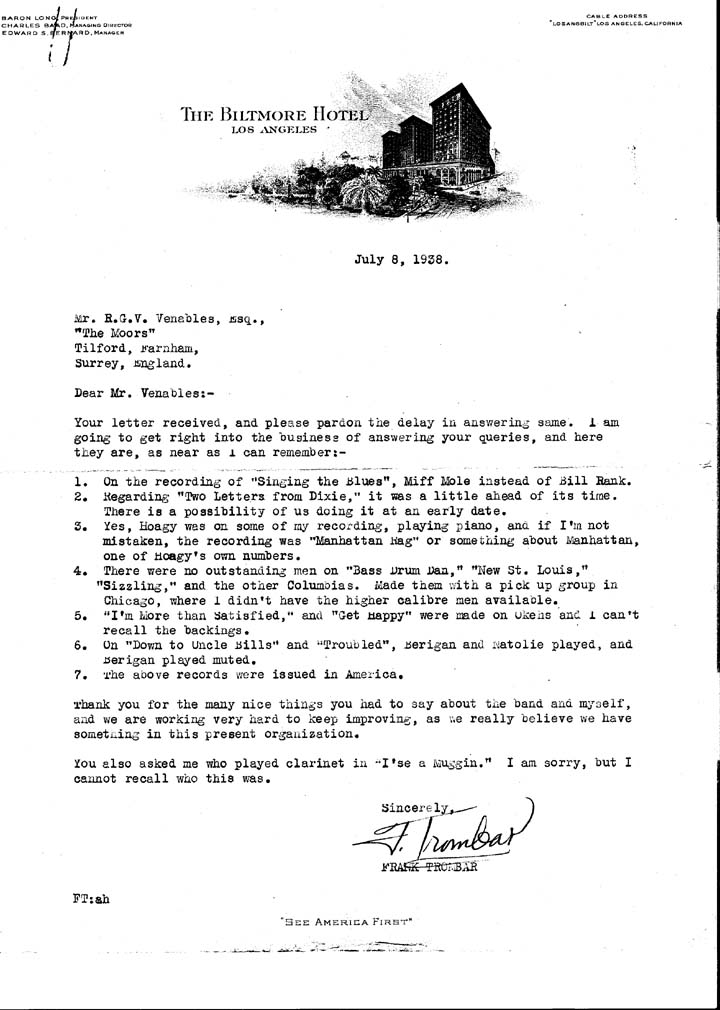 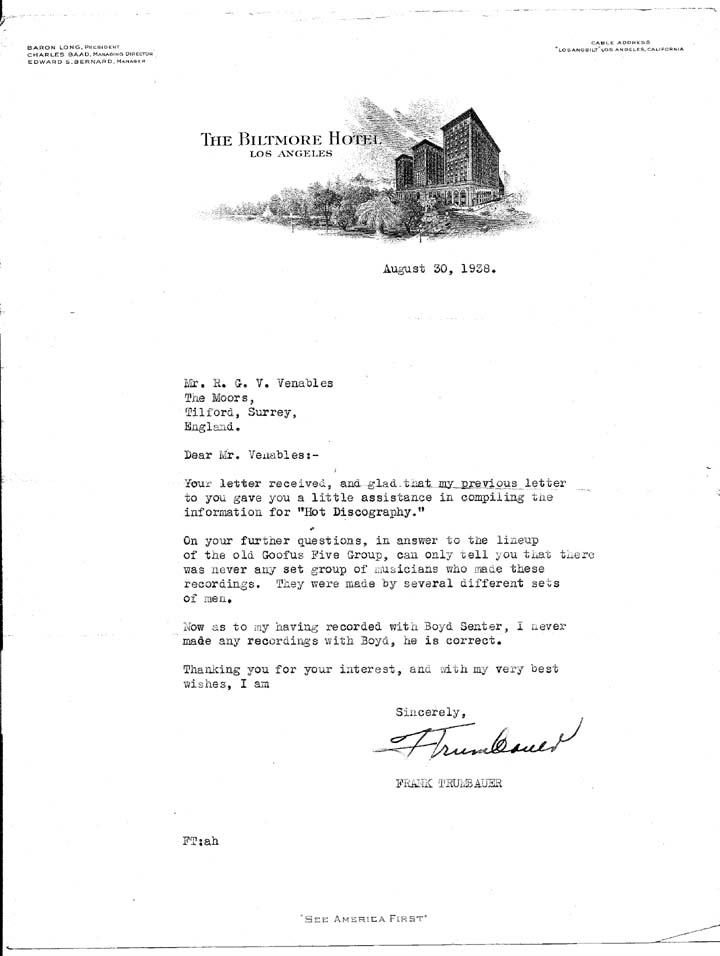 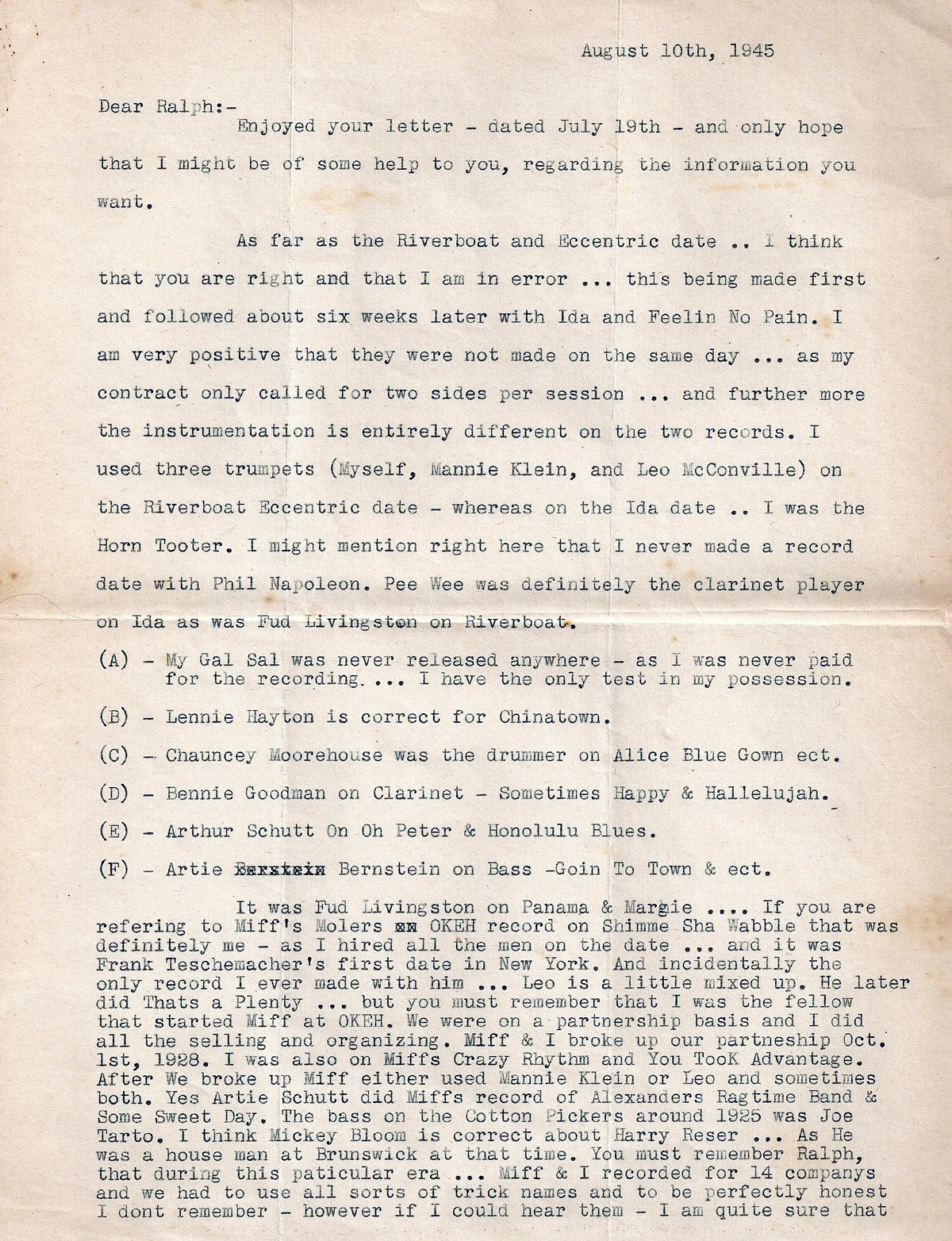 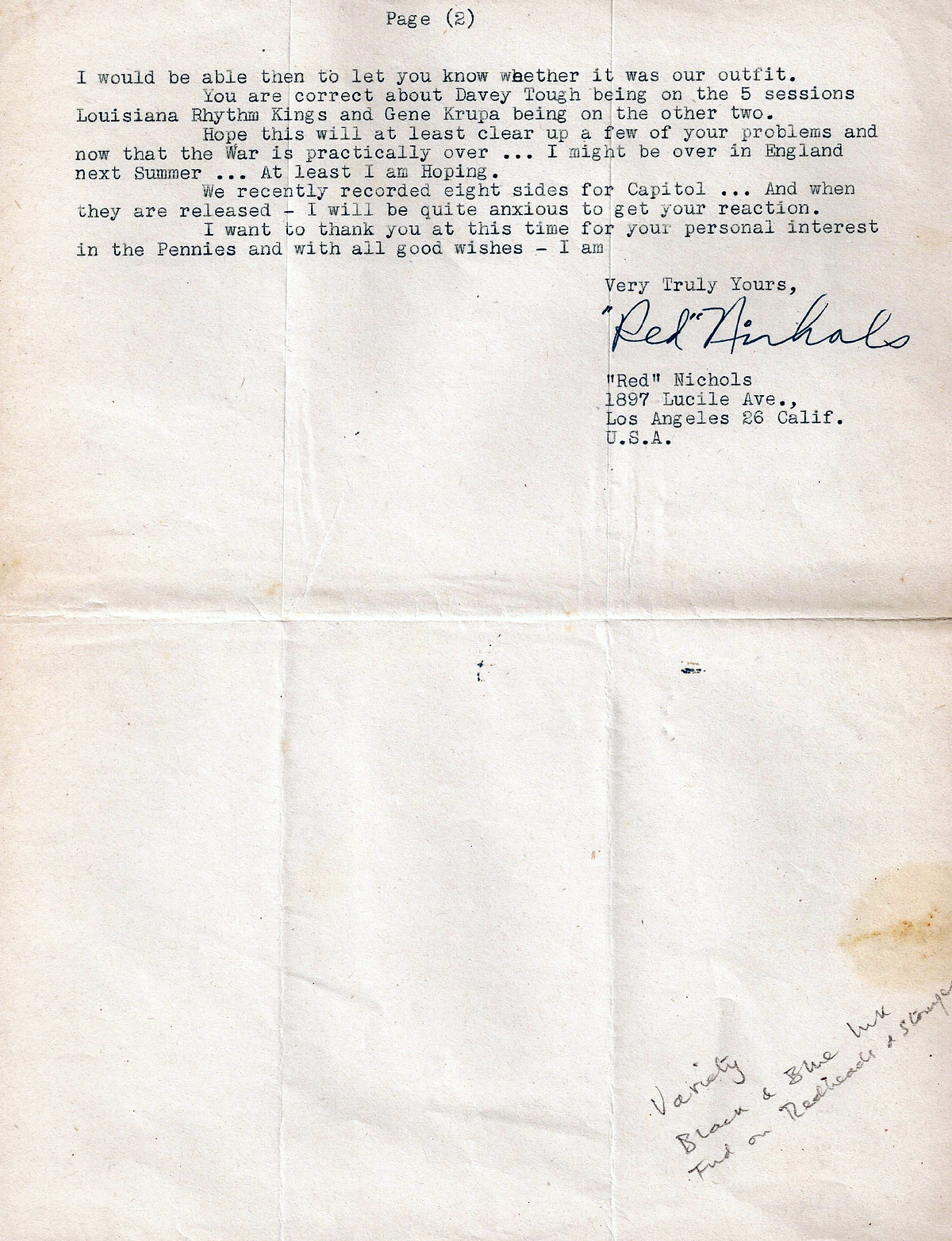 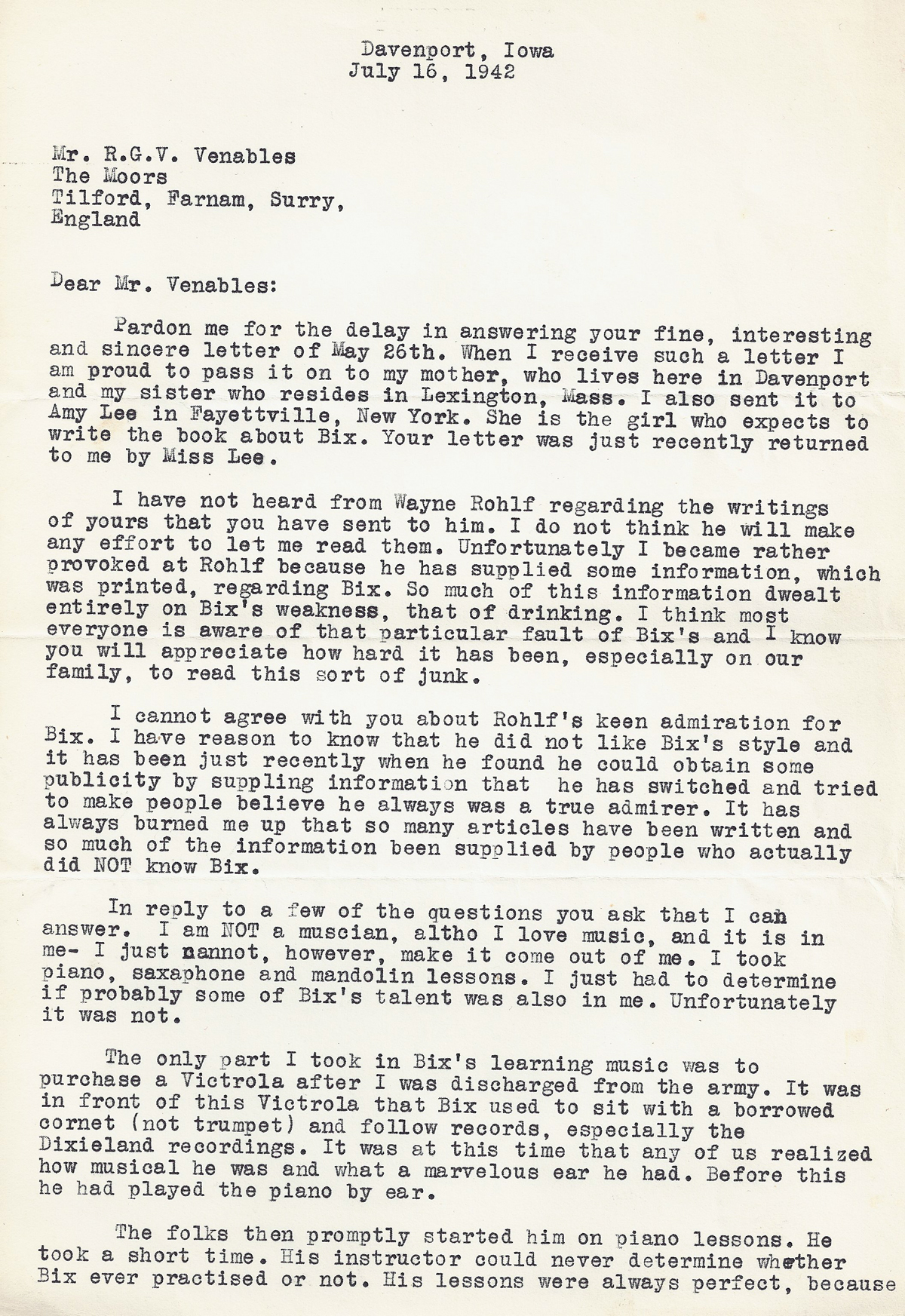 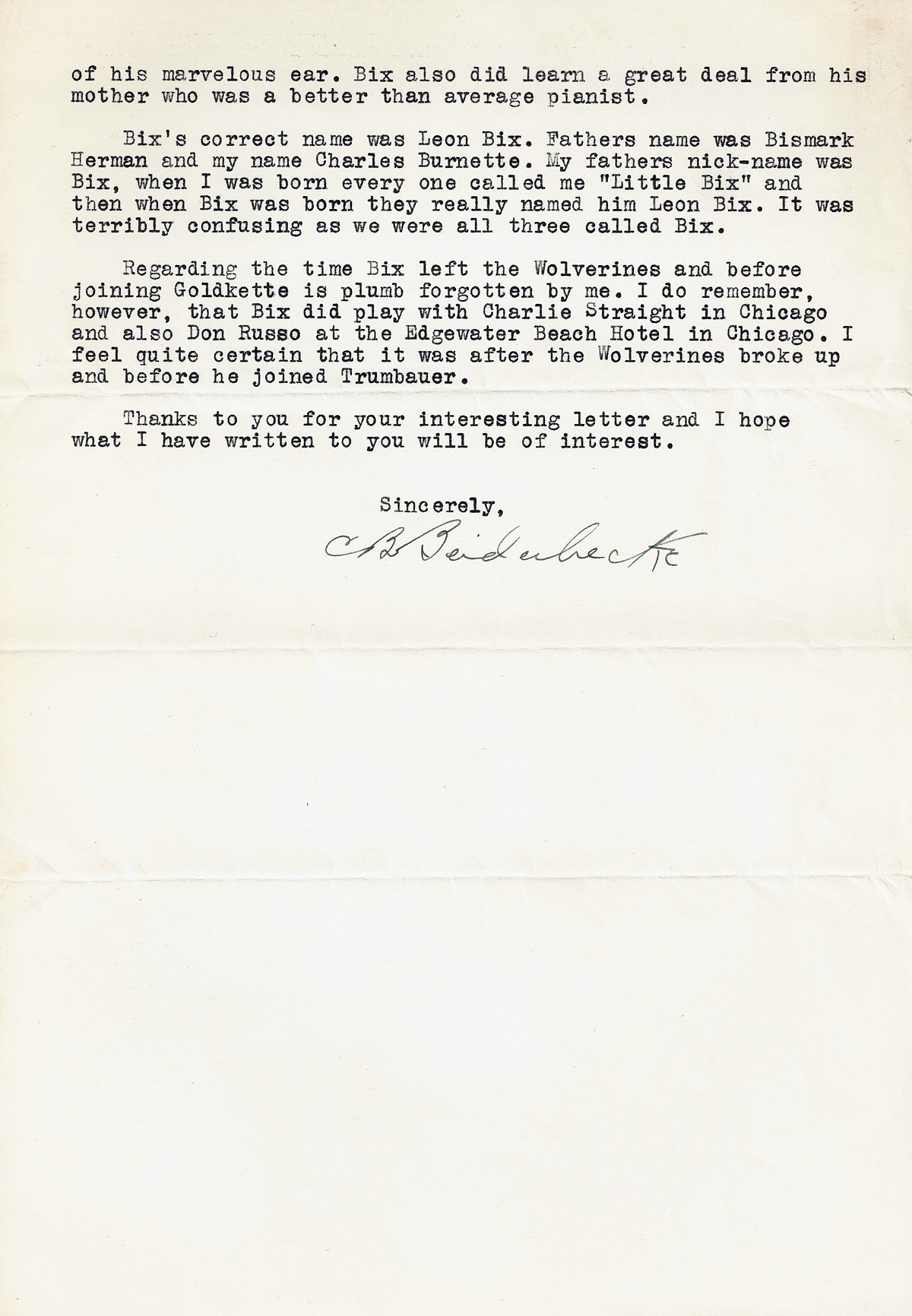 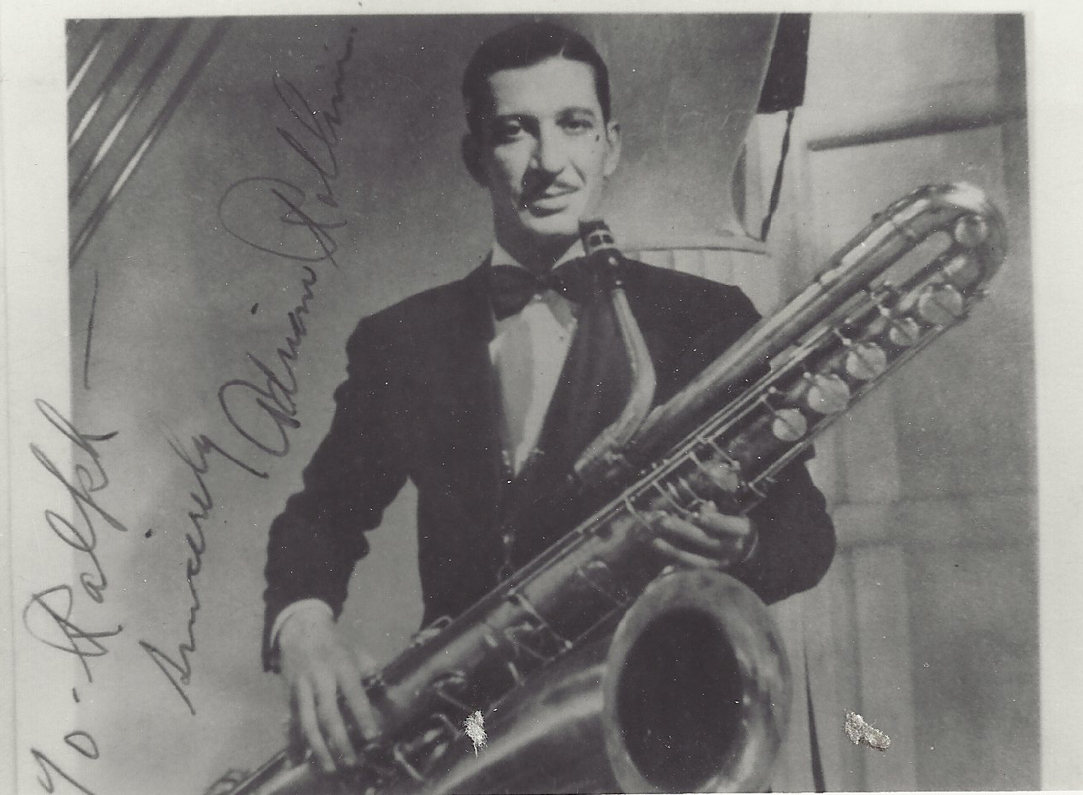 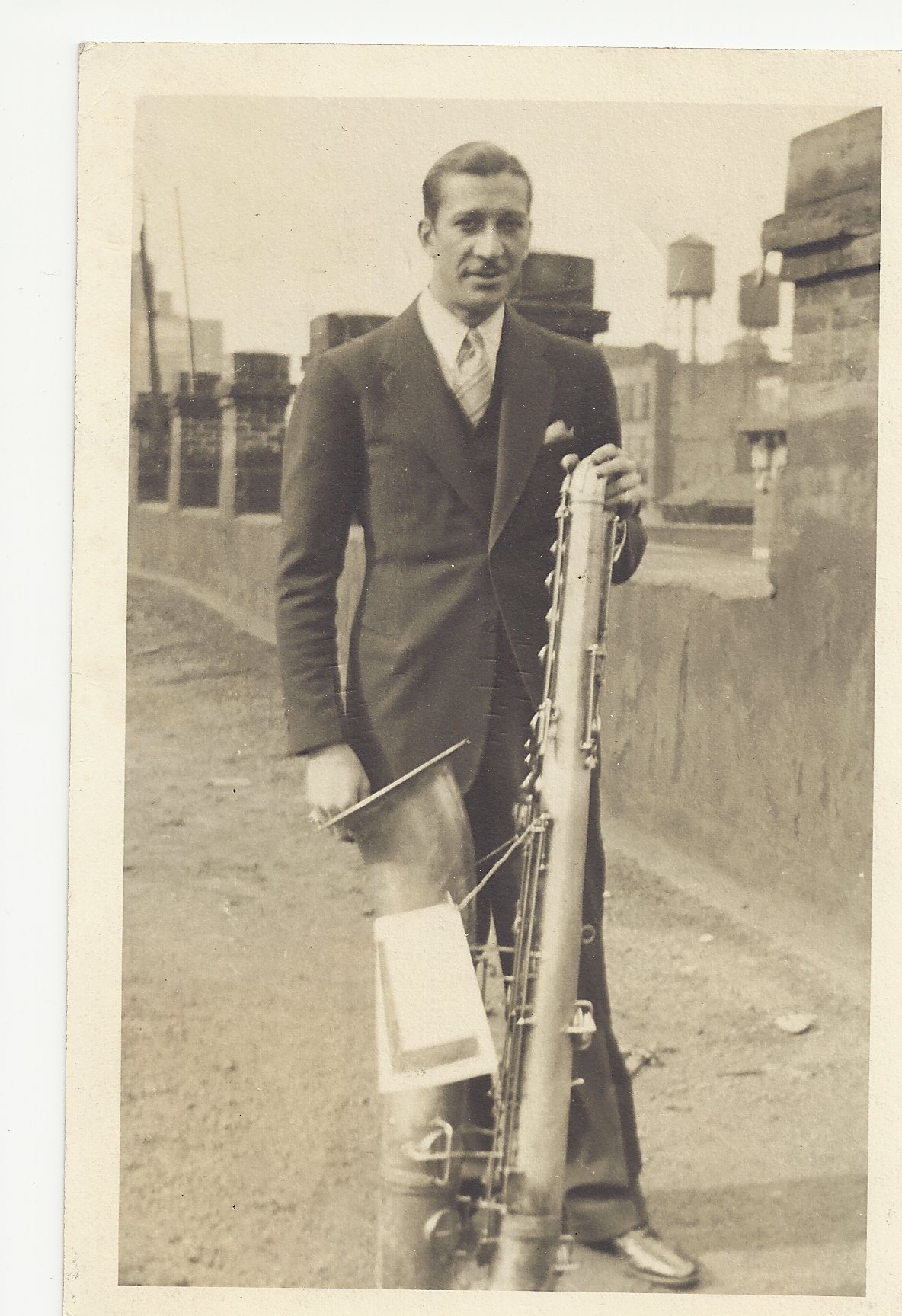